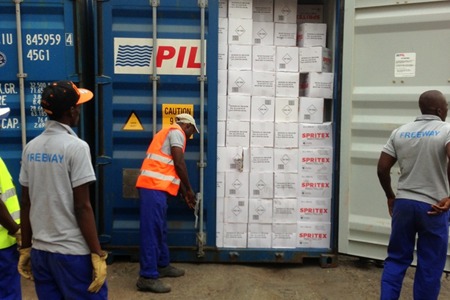 FAKE SPRITEX IMPORTED INTO AFRICA FROM OUTSIDE OF EUROPE

Intropa and our sole distributors in Africa work closely with the economic police to ensure importers purchasing Spirtex for import into Africa from countries other than Europe will have their shipments seized and confiscated at the port.

WARNING: PURCHASING SPRITEX PRODUCTS FROM OUTSIDE OF EUROPE FOR IMPORT INTO AFRICA IS ILLEGAL. YOU WILL HAVE YOUR GOODS CONFISCATED AND MAY FACE PROSECUTION, FINES AND JAIL

Below are photos showing the Police Economia in Angola siezing several shipments of Spritex imported from countries other than Europe.